Limbo is for sale

UPDATE:  Limbo is now sold and will be moving to Cornwall soon...


After 10 years of enjoyment we are putting Limbo up for sale, with rather mixed feelings.

We will be looking for something slightly larger (albeit probably very much in the same style!).

Limbo is in ready to sail condition, lying Southampton. 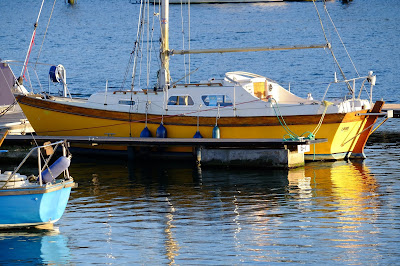 Last days in the BVIs. The End.

With Limbo stowed on MV Fagelgracht, awaiting her passage back to Southampton, we had a few days to spare before our flights home.  Olly and Carlotta on Troskala had offered to have us on board for what turned out to be a wonderfully care-free few days cruising the BVIs - free of the pressures of skippering and among friends.  The BVIs turned out to be a spectacularly good cruising ground, with a beguiling combination of line-of-sight navigation, decent wind, yet sheltered seas.  The only downside, of course, being the volume of charterers who - I couldn't help thinking - had not really earned their right to be there..

We sailed, swam, drank, swam again, and took our leave of the Caribbean and the cruising life - for now.  I will leave you with a few pictures. 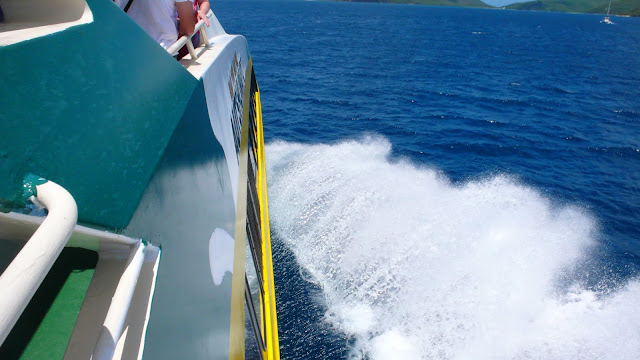 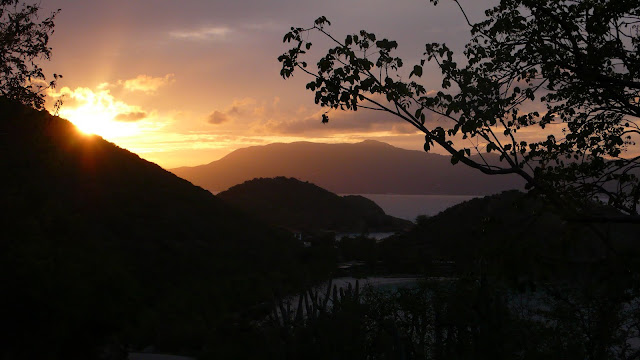 We sailed in company with Troskala to Road Town, Tortola - an easy downwind run, with a swimming stop.


We anchored in the inner harbour, where space was tight and holding dodgy.  Emma and Stuart on Amorosa were there, after a long and mainly windless sail from the Grenadines, a long way to the south.  They had rushed to get to the BVIs in time, and their Sadler 26 would be shipping back with Limbo in a few days.  Fantastic to be reunited.


Before we could get our boats over to St Thomas, in the USVIs, we had to perform a convoluted exercise to legally enter the islands.  A visa waiver scheme operates for mass transit passengers.  With two of us on board, we hardly qualified for this.  Longer-term cruising in the States requires a proper visa which can be obtained, following an interrogation, from a couple of inconveniently-located embassies (Trinidad, Puerto Rico).   (The answer is to get one in London, before you go, just in case you want to go to the States, USVIs or Puerto Rico - which by all accounts is well worth seeing).

Fortunately for us, there was a perfectly legal way round this for short stays: (i) travel to the USVIs by ferry; (ii) get your passport stamped with your tourist/mass transit visa; (iii) return to the BVIs by ferry; (iv) enter by yacht, using your pre-stamped passport.

Getting the magic passport stamp was our mission for the following day, and we joined Emma and Stuart on the fast hydrofoil ferry for a day-trip to St Thomas.  On the top deck, it's an exhilarating ride and a great view of the islands we'd soon be travelling through at a much reduced pace.  It all went to plan, and we were back on board Limbo that evening.

We sailed to St Thomas over the next couple of days (distances are short in the islands), with a calm overnight stop at an anchorage north of Cruz Bay on St John's.  We gave the Amorosas supper and rum on Limbo.  It was hard to believe this was coming to an end.


Cruz Bay is a port of entry, and we anchored off for a quick trip ashore for customs and immigration.  In the process we were, apparently, too close to someone's mooring buoy - and encountered the most aggressive, unpleasant individual we'd seen in months of cruising, who circled us in his dinghy yelling 'haul off!'  Welcome to the States...

We are in the US Virgin Islands, having rushed up here at fairly short notice.  With the hurricane season fast approaching, and feeling that we weren't ready for another long ocean passage just yet, we've decided the best option is to bring Limbo back on a ship. I'll write about how we made that decision in much more detail when I get time. The organisation has been interesting...

In the meantime, we're about to enjoy one last evening with our friends on Amorosa before Limbo is loaded on the MV Fagelgracht tomorrow.  The trip isn't quite over for us: we're looking forward to a few days sailing with Oliver and Carlotta on Troskala before flying back to the UK.

Don't stop reading - there are more instalments to come!

We can't quite believe it's nearly over. 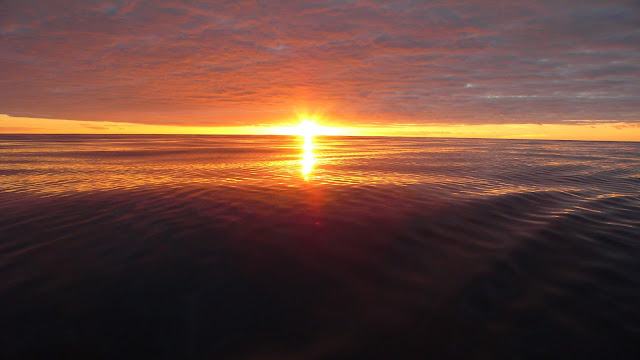 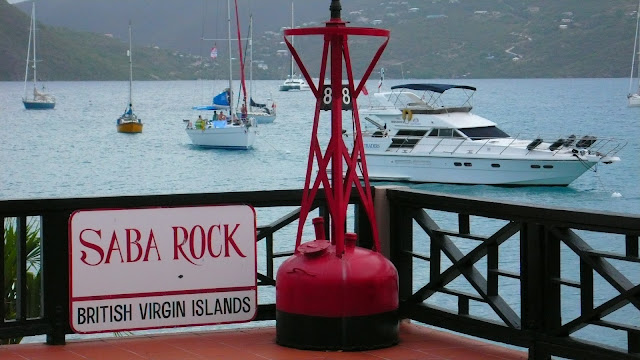 Most of our first day in the BVIs was taken up with paperwork - signing in with immigration, then finding Wifi to confirm our shipping place and sort out payment.  We needed to print and scan some forms for the shipping company, and it took a while to get everything sorted - helped by a friendly estate agent who let us use her office.  Finally we were free and could relax.  It was the 7th May, and we were shipping from the USVIs, slightly later than scheduled, on the 14th.


At the dinghy dock, we were delighted to finally meet Fiona and Iain on their Sadler 34 Ruffian - they knew several of our friends, including Oliver and Carlotta of Troskala, who were now anchored just the other side of the island.  We hadn't seen Troskala since Madeira, and it was time for a reunion.

Email ThisBlogThis!Share to TwitterShare to FacebookShare to Pinterest
Labels: BVIs, The Voyage

Limbo's rendezvous with a ship arranged, we were to head back round the corner to Jolly Harbour to regroup and get some provisions in, before hurrying to the BVIs.

Except the engine wouldn't start, leaving us feeling vulnerable in the fairly exposed anchorage. Normally switched separately to guard against exactly this eventuality, except when I forgot, our batteries had both been drained by our heavy laptop use courtesy of Dickenson Bay resort's wifi.  Not a good moment.  But for the first - and almost certainly last - time, we were grateful for jetskis: they use starter batteries. Lugging a heavy battery ashore in the dinghy, we asked nicely and it was soon hooked up to a charger for a few hours' boost.  We had a drink in the bar and wandered along the shore for a swim.  We couldn't help noticing the deadly bored demeanour of the holidaymakers there.  Perhaps they were disgruntled to find themselves on this rather scrubby outpost of a beach rather than among the gleaming white sands and reef-blue waters the Sandals brochure, no doubt, had promised...

We waited a decent amount of time, headed back, re-installed the battery, and were on our way.  Anchored again in Jolly Harbour, we told Bella of our plans and dinghied into the supermarket.  Hailed by a late middle-aged couple from their Legend on the way back, we went over for drinks and a chat.  A happier evening than the one before.

We couldn't have asked for an easier trip north (or, from a sailing point of view, a less satisfactory one).   We left Antigua the next day with a nice breeze, and soon some heavy rain.  I waited outside the customs hut for more than an hour to clear out - the customs lady, totally unapologetic, explained she'd been doing her shopping.

The plan was to head to Nevis, but it was straight to windward and we altered course for a more comfortable sail to St Martin.  But the often-boisterous Caribbean soon slept, and before long we were motoring over a sea calmer than we had seen for weeks.  Natalie, as Chief Dolphin Spotter, duly saw just those on her early evening watch.  The islands of Kitts and Nevis stood hazy-blue on the horizon to the west towards dusk, and we carried on through the night.  Shooting stars and lightning flickering silently on the horizon. It was a while since we'd done night watches.

Not long after dawn, we approached St Martin and dropped anchor in the large harbour. I had a swim. We slept. Later in the day we found the uncomfortably high-walled fuel berth where a friendly Rastafarian refilled our tanks, ready for the second half of the trip.  We got away without signing in.

We had a beautifully still afternoon sail along the well-developed, well-heeled coastline where jets come in to land just feet above the heads of sunbathers.  Saba was visible on the horizon, a stunning island I had glimpsed during a night passage on Trompeta years ago, and had vowed to visit. Maybe next time.

It was comforting to have islands in sight all the way on these two passages: Nevis, Kitts, Saba, St Barts...  For some time it was just us, the wind and the sound of the waves.  Sadly, inevitably, the wind died and it was back to the drone of the engine. We raised the BVIs early the next morning.

It was a stunning approach, sandy-green hillocks emerging as we came closer in the early morning light.  We passed through the high cliffs of the deserted, rocky chain of smaller islands to the south and into the shelter of the Sir Frances Drake channel.  An hour or so later we dropped anchor off Spanish Town, Virgin Gorda. In lieu of sleep, we jumped in and swam in the invitingly clear water.

Wildlife of the Caribbean

Wildlife spotting is one of the many pleasures of sailing and hiking in the Caribbean.  We often didn't know exactly what we were looking at (and, in spite of searching in several places, never found a good wildlife guidebook), but - whatever it was - there was a lot of it.

We often saw pelicans diving for fish or sitting, statue-like, on moored boats.

We were delighted to see turtles regularly. They would often appear near the boat in various anchorages, staying for half a minute or so before diving down.

I've no idea what this is.. 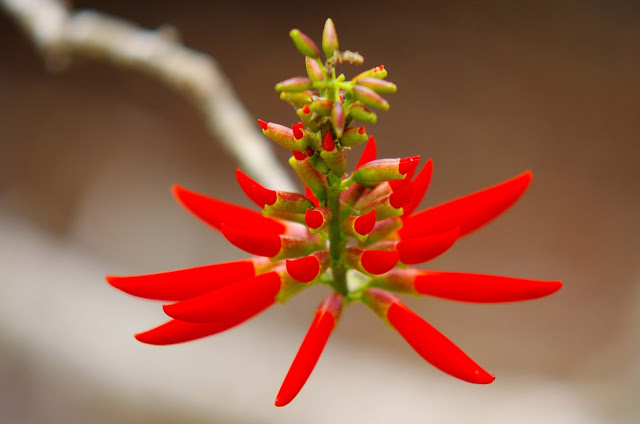 We saw several of these large, fat caterpillars in Martinique and on other islands.  They're a good 10-15 cm long and feed on frangipani. 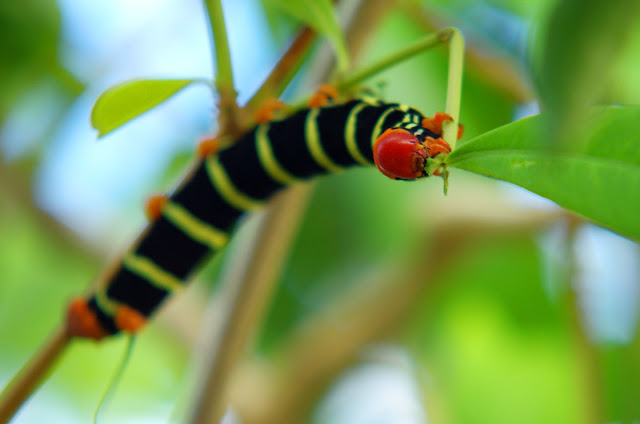 Not exactly wildlife..but I liked the photos. 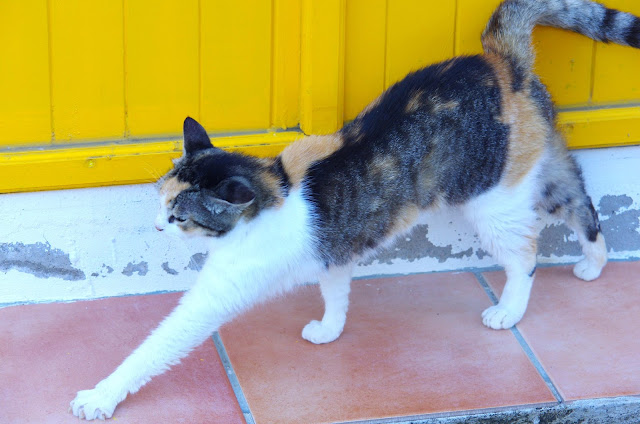 Limbo is a Samphire 26, built in 1977. An exceedingly robust little vessel with all the pretensions of a yacht much larger, according to Yachting Monthly. She's small, but she's proving to be a practical and capable cruising boat. Read more about Limbo here.

Across the Atlantic in a 26-foot yacht 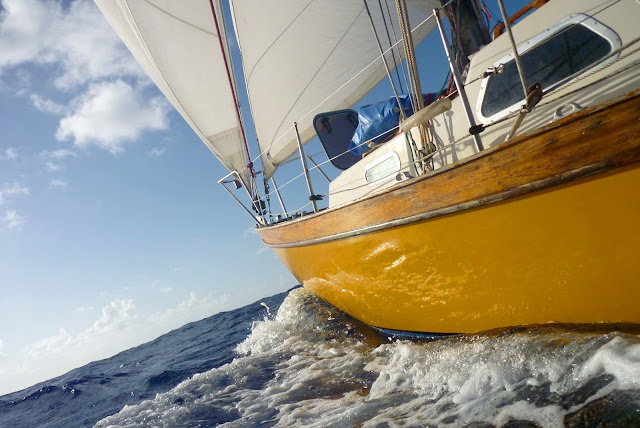 If you'd like to contact us directly, just leave a comment under a post with your email address and I'll get back to you. (Comments are previewed and I won't publish the address). I'd be happy to hear from you.
We're home now - but have a look at our Yellowbrick tracking site for our position reports and some brief updates sent at sea.

About us
We’ve given up our jobs to sail away for a year or so. I’ve wanted to do this on my own boat since a gap year crewing across the Atlantic in 1998/99. I’ve built up more than 20,000 miles of experience on various craft, including a trip to Greenland and back, sailing round Ireland on a tall ship, and a memorable summer in the South Pacific. I hold an RYA Yachtmaster certificate – although there’s still plenty to learn. Natalie, my fiancée, is Limbo’s First Mate and Chief Dolphin Spotter. This is her first long trip after a couple of summers’ cruising on the UK South Coast and in Brittany. She seems completely unfazed by large waves, and is gradually learning to differentiate between sea mammals and driftwood.